A decisive step towards the creation of National Archives 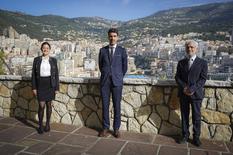 The Principality of Monaco will, eventually, have a national institution dedicated to contemporary archives of public interest that will co-exist alongside the Archives of the Prince’s Palace, which are Crown assets.

The National Archives Preparatory Team was established by a Sovereign Ordinance dated 25 March 2021. The aim is to create a State office entirely devoted to archives of public interest with heritage value, which will be available to the Government, Monegasque nationals, residents and researchers. Heritage Curator Michaël Bloche, a graduate of the Ecole Nationale des Chartes who holds a doctorate in History, has been entrusted with managing the effort.

Heritage documents produced by the Government prior to the 1911 Constitution are and will continue to be held at the Archives of the Prince’s Palace. With regard to those produced by the State’s executive branch after this date, the Central Records Office (SCADA) was given responsibility for permanently retaining them in 2011.

Today, a further step has been taken, with the Sovereign Ordinance considerably expanding the scope of the public archives. In addition to the State’s executive branch, the public archives include some or all of the archives of all public and quasi-public bodies: the National Council, the Diocese, the Department of Justice, the Commune, independent administrative authorities and other public sector bodies which are not established as legal entities. They also cover public institutions, private bodies who hold or have been granted a concession, responsibility for the provision of a public service or a general interest remit, such as the Société des Bains de Mer (SBM), and court bailiffs and notaries in their capacity as public or legal officials. This new definition has significant implications for archives with heritage value in terms of support for their management, inventorying and destruction.

Drawing on its scientific and technical skills, the Team’s priority will be to raise the awareness of those who produce archives of public interest, regardless of their status, about the value of their collections, to ensure that collections are properly preserved and prevent any unfortunate destruction.

This should guarantee better use of the materials which will allow the Principality’s contemporary history to be written, primarily that of the twentieth and twenty-first centuries, but also that of the nineteenth century in the case of some producers outside the State’s executive branch (for example SBM, the Commune, the Diocese, notaries and the Department of Justice).

The Team has also been given the tasks of proposing, over the coming years, legislation on archives, in a bid to standardise the wide variety of procedures employed from one producer to the next, and of developing digital archiving, in collaboration with the Digital Transition Office and the Monaco Cyber Security Agency. Audrey Bloche, who holds a Master’s degree in Digital Technologies Applied to History from the Ecole Nationale des Chartes, and who, as Conservation Officer, led a mission to redigitise the departmental archives in Calvados, will be responsible for the digital archiving component.

Replacing the State Archives Consultative Committee, the Public Interest Archives Consultative Committee, chaired by Jean-Charles Curau, Honorary Director of Cultural Affairs for the Principality and current Secretary-General of the Prince Pierre of Monaco Foundation, will put forward proposals and recommendations to help the Prince’s Government and the National Archives Preparatory Team to establish the major outlines of the Principality’s archiving policy. The Committee will include representatives from the main producers of public archives as well as a college of experts in archiving and history: Thomas Fouilleron, Director of the Prince’s Palace Archives and Library, Olivier Poncet, Professor at the Ecole Nationale des Chartes, and Evelyne Van Den Neste, Head of the Archives and Documentation Department at the Office of the President of the French Republic.