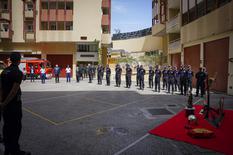 It was with great sadness that the Prince’s Government learned of the death of Sergeant Thierry PERARD, age 52, who responded with his colleagues to the fire that raged yesterday afternoon in the 21 Princesse Grace building.

An experienced firefighter, Sergeant Perard joined the Monaco Fire and Emergency Service 26 years ago. His tragic death is a painful reminder of the total commitment that firefighters demonstrate as they help our national community.

On behalf of the Prince’s Government, the Minister of State Pierre Dartout offers his sincerest condolences to Sergeant’s wife, daughter and loved ones, and assures them of his full support at this particularly difficult time.

During a visit to La Condamine fire station early this afternoon, the Minister of State and the Minister of the Interior, Patrice CELLARIO, shared the Government’s sympathies with the entire Fire and Emergency Service, which is once again in mourning, and with the family of the deceased.