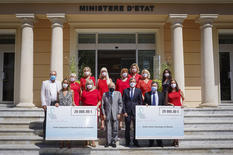 Since 2017, the Association Femmes Leaders Mondiales Monaco has been raising awareness of cardiovascular diseases in the Principality, in particular by inviting women to be assessed by a specialist.

A spring luncheon was held at the Yacht Club of Monaco on 10 June, in the presence of its Honorary President, H.S.H. Princess Stephanie of Monaco. At this luncheon, an art auction took place, and generous donations were received. All the proceeds were donated to Princess Grace Hospital and to Monaco Cardiothoracic Centre, which were partners of this event, and will be used to provide treatment for women suffering from cardiovascular disease.

The official presentation of the cheque took place on the forecourt of the Ministry of State, in the presence of the Minister of Health and Social Affairs, Didier Gamerdinger, Mr. Guy Nervo, Dr. Armand Eker and Dr. Jean-Joseph Pastor from Monaco Cardiothoracic Centre, as well as Ms. Benoîte de Sevelinges, Director of Princess Grace Hospital, with the President of the Femmes Leaders Mondiales Monaco, Chantal Ravera and the FLMM members of the "Saving Women's Hearts" Committee.