30th Anniversary of the International Convention on the Rights of the Child : The Lycée Albert 1er Hosts an Exhibition on Child Trafficking 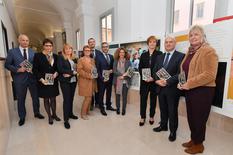 To mark the 30th anniversary year of the International Convention on the Rights of the Child (CRC), an exhibition on the subject of child trafficking was inaugurated at the Lycée Albert 1er on 6 November.

Until 29 November, pupils will therefore be able to see photographs illustrating development cooperation projects that are supported by the Prince's Government

The Prince's Government, which ratified the Council of Europe Convention on Action against Trafficking in Human Beings in 2015, wishes to raise awareness among the general public, particularly among young children, of the actions it supports in this regard.

This exploitation of vulnerable people affects all countries and can take forms as varied as forced labour, sexual exploitation, forced begging, forced theft and organ trafficking.

On Wednesday 20 November, the day of the 30th anniversary of the CRC, this exhibition will be moved to the forecourt of the Grimaldi Forum, to link it to the educational activities that the DENJS has planned in this context.  An exhibition by the High Commissioner for Refugees, "My Country is a Camp," will also be presented at the same time.

Finally, a brochure on the rights of the child and trafficking, produced jointly by the entities concerned, will be distributed in the Principality's schools throughout the month of November.

10 July 2020 Press release
30th Anniversary of the International Convention on the Rights of the Child : The Lycée Albert 1er Hosts an Exhibition on Child Trafficking
Contact us
http://en.gouv.mc/A-la-Une-du-Portail/30th-Anniversary-of-the-International-Convention-on-the-Rights-of-the-Child-The-Lycee-Albert-1er-Hosts-an-Exhibition-on-Child-Trafficking