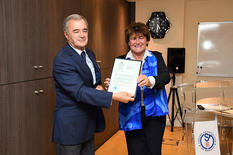 Ms Zsuzanna Jakab, the WHO's Regional Director for Europe, presenting the official declaration to Professor Patrick Rampal, President of the Board of Directors of the Scientific Centre. © - Government Communication Department / Manuel Vitali

At the 3rd meeting of the Small Countries of Europe, held by the World Health Organization (WHO) and the Prince's Government, Ms. Zsuzanna Jakab, the WHO's Regional Director for Europe, announced that the WHO had designated the Human Health Unit of the Biomedical Department of Monaco Scientific Centre as a WHO Collaborating Centre for Health and Sustainable Development.

This designation recognises the Centre's longstanding work in this field.

The Scientific Centre's mission is to promote the transfer of knowledge in the areas of the environment, climate change and health, and assess the impact of climate change on health in coastal countries.

From the shoreline to the deep sea - The beauty and fragility of an underwater world World Oceans Day – 8 June 2019 - Espace Miramar, Cannes