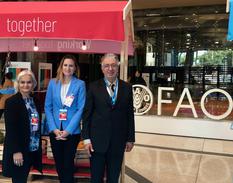 Having been a member since 2015, the Principality of Monaco took part in the work of the 46th session of the Committee on World Food Security (CFS) from 14 to 18 October. The theme for this year’s session, which coincided with the 74th anniversary of the Food and Agriculture Organisation (FAO), was “Accelerating progress on SDG2 (end hunger) to achieve all the Sustainable Development Goals”.

During the session, two annual reports were presented: State of Food Security and Nutrition in the World (SOFI 2019), which reports an increase in hunger for the third consecutive year (821 million or one in nine people) and The State of Food and Agriculture (SOFA 2019), which focuses on reducing food loss and waste. Concerns about malnutrition and its consequences, particularly obesity, are also on the rise.

The CFS observed World Food Day on 16 October, in the presence of the three heads of the United Nations organisations headquartered in Rome (FAO, International Fund for Agricultural Development (IFAD) and the World Food Programme (WFP)), the Italian Prime Minister, the United Nations Special Rapporteur on the Right to Food and Professor Jeffrey D. Sachs, who examined the challenges facing sub-Saharan Africa using a comprehensive analysis of the prospects for cooperation benefitting the least developed countries. The session also shone a spotlight on the women and girls who are strengthening resilience in the face of climate change on the International Day of Rural Women, and kicked off the UN Decade on Family Farming 2019–2028. The CFS adopted its multi-year programme of work for 2020 to 2023, which aims to accelerate progress towards achieving SDG2 by focusing on agroecological and other innovative approaches.

Finally, Italian Prime Minister Giuseppe Conte announced that his country “would be honoured to host” the World Food Summit in 2021. The Summit will seek to mobilise the full strength of the international community to meet the Zero Hunger Challenge.

The Prince’s Government is actively involved in efforts to combat hunger as part of its international development policy. It is investing more than EUR 2.6 million this year in food security and child nutrition initiatives in primarily African countries. The FAO and WFP are key partners in helping the most vulnerable populations to feed themselves in areas that are struggling as a result of climate change and conflict.