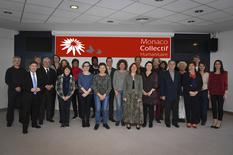 On Tuesday 10 March 2020, members of the Monaco Humanitarian Collective (charities, treatment centres and the Prince’s Government) held their traditional annual meeting. The Collective has achieved a great deal: since it was established in 2008, 428 children, mostly from Africa, have received surgery for cardiac and some orthopaedic conditions in Monaco, Nice and also, since last year, in Mali.

In a new development in 2019, of the 36 children treated by the Monaco Humanitarian Collective over the course of the year, 10 were treated in Mali after €35,000 were allocated to the Collective’s partner, Chaîne de l’Espoir (Chain of Hope), to fund 10 children’s operations at the Festoc Centre in the Luxembourg Mother and Child Hospital in Bamako.

The same hospital also hosts the brand new MAMOS (Mali-Monaco-SHARE) catheterisation unit, which will expand the ability to treat children and adults in Mali and the sub-region. The unit, whose foundation stone was laid three years ago, was officially opened last month in Bamako, in the presence of Laurent Anselmi, the Minister of Foreign Affairs and Cooperation.

During the meeting, the Department of International Cooperation, which leads this project, thanked the generous and loyal donors to the Monaco Humanitarian Collective, emphasising the role and commitment of footballer Olivier Giroud, the Collective’s Ambassador, and its charity members.