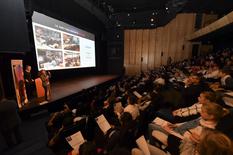 Pupils from Monaco voting for the Children's Prize in the presence of Marc Obéron, founder of the Festival and Bénédicte Schutz, Director of International Cooperation ©Government Communication Department/Michaël Alesi

On Thursday 29 November, "Le Temps Presse" festival, which is supported by the Prince's Government, took over the Variety Theatre in Monaco and the Sciences Po Paris campus in Menton. More than 200 pupils from Monaco and 130 students voted for their favourite films, as members of the Youth juries.

For the 8th consecutive year, "Le Temps Presse" festival is part of a socially committed approach to citizens' cinema.  It presents short films from all over the world on the subject of the 17 Millennium Development Goals adopted by the United Nations.   This year, eight prizes will be awarded.

Children from ten classes from four schools in the Principality chose their favourite short film from the four shortlisted for the Children's Prize.  Their votes will be added to those of more than 2,000 other members of the children's jury who attend schools in seven partner countries of Monaco's Official Development Assistance.*

For their part, first-year students of the Sciences Po Paris Middle East and Mediterranean campus in Menton watched the five films that had been pre-selected for the Students' Prize and chose their winner together.  It should be noted that, under a partnership agreement signed in 2014, the Department of International Cooperation and the Campus are working together to raise students' awareness of development issues and the fight against poverty around the world.

The awards ceremony for "Le Temps Presse" festival will take place on 1 February 2019 in Paris, in the presence of many socially committed celebrities.