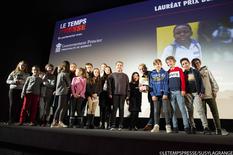 Debout Kinshasa ! is awarded the Children’s Prize at Le Temps Presse. In the middle are the two pupils from École de Fontvieille, Léna and Mathéa. © LETEMPSPRESSE/SUSYLAGRANGE

The award ceremony for the short film festival LE TEMPS PRESSE was held on Friday 1 February in Paris, and attended by representatives from the Prince’s Government, pupils from École de Fontvieille and students from the Sciences Po campus in Menton, who were there to present the Children’s Prize and the Students’ Prize, for which they had served as the juries.

The Prince’s Government has supported this international festival of responsible and socially aware cinema since 2011, with a particular focus on the prizes awarded by young people in a bid to raise pupils’ and students’ awareness of the Sustainable Development Goals.

This year, the Children’s Prize was based on the votes of more than 2,000 pupils at schools in Monaco, France and countries supported by Monaco’s Official Development Assistance. It was Sébastien Maitre’s film Debout Kinshasa ! (Wake Up Kinshasa!), which caught the interest of the young audience. With a hefty dose of humour, this short film relates the ups and downs experienced by young Samuel, aged 10, who discovers “the kingdom of muddling up and muddling through” in the Congolese capital, as he tries to return to school after he is excluded because his shoes aren’t polished properly.

The Students’ Prize was awarded to the animated film Vermine (Vermin), directed by Jeremie Becquer. The students from the Sciences Po Paris campus in Menton, a partner of the Prince’s Government, and other higher education institutions in France, were gripped by the poignant tale of a rat poet confronted with the harsh reality of a society biased towards mice.

Led by French actress Juliette Binoche, the renowned members of the Jury* also awarded seven other prizes, including the Biodiversity Prize and the Gender Equality Prize.