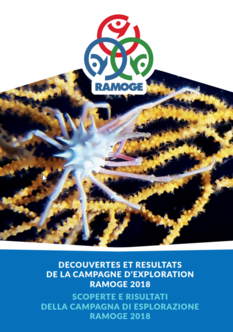 The RAMOGE Agreement1 has just published a booklet entitled "Discoveries and Results of the 2018 RAMOGE Campaign" (accessible from its website). The aim is to enable readers to immerse themselves in the hidden world of deep marine environments and learn about the surprising scientific discoveries and the worrisome pressures that threaten these fragile areas.

In 2014, following a workshop held by the Convention on Biological Diversity (CBD), two Ecologically or Biologically Significant Areas (EBSAs) were identified in the north-western Mediterranean. The RAMOGE Agreement zone is in the middle of these areas, and scientists from the working group on ecological status matters were able to identify 66 sites of specific interest.

Following this inventory work, the Agreement chose to develop this international cooperation to address the scientific study of deep-sea sites and propose an exploration campaign every two or so years.

Following an initial campaign in the coastal area in 2015, a second oceanographic campaign, undertaken in 2018, collected new data in the canyons and deep areas offshore. Ten scientists from the Agreement's three member countries were thus able to sail on board "L'Atalante," Ifremer's impressive oceanographic vessel, which is equipped with, among other features, a multibeam sonar and a Victor 6000 ROV that can descend to a depth of 6,000 metres.

Processing the considerable amount of data collected, some of which is truly unique, will make an important contribution to increase knowledge of deep-sea environments, in order to develop collaborative management measures to ensure these environments are protected.

This exploration campaign would not have been so successful without the commitment of its mission leader, Mr. Boris Daniel, who passed away in 2020. Mr. Daniel was in charge of the Marine Natural Heritage mission at the Mediterranean branch of the French Agency for Biodiversity (now the French Office for Biodiversity).

The RAMOGE cooperation experience for studying deep marine environments will continue in the future, as soon the health situation allows.

1 International cooperation agreement between France, Monaco and Italy for the preservation of the coastline and marine environment in the area between Marseille and La Spezia.