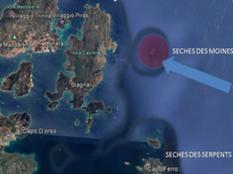 The next RAMOGEPOL* exercise, organised this year by the Italian delegation, will take place on 12 and 13 September 2018 in the Italian territorial seas, by the Strait of Bonifacio, near the Maddalena Archipelago.  The area for the exercise, which is particularly sensitive, was chosen because of its special character.  The Strait of Bonifacio is an international strait that is almost 7 miles wide, between Sardinia and Corsica.  This inlet is well known to navigators because of its dangerous waters, with currents that are sometimes extremely turbulent and from which many rocks emerge.

The scenario of this exercise will begin with a collision involving a commercial vessel that is being battered by the weather, with the shallows of Les sèches des Moines approximately 1.8 miles away, to the west of the island of Caprera.  As a result of this impact, a breach forms in the hull of the vessel to the right of the fuel tank, causing approximately 200 tonnes of fuel oil to spill into the sea.

In view of the seriousness of the situation, in particular with regard to the environmental risks, in particular the proximity of the Maddalena Archipelago National Park, the coordinating authority will request the activation of the RAMOGEPOL plan and will ask the resources of the Agreement's member countries to implement pollution control.  Under the direction of the Italian coordinating authority, each unit will deploy its own pollution control resources (floating booms, skimmers, ship to ship and stocking) in order to test the organisation, coordination and rapid response to a major incident in as realistic a manner as possible.

These regular training sessions are important because they offer an opportunity to monitor the reactivity of all those involved, the effectiveness of coordinating anti-pollution operations and good communication between the various units.  They also make it possible to ensure that the RAMOGEPOL plan responds appropriately to a pollution crisis.

*Within the framework of the operational activities of the RAMOGE Agreement, a cooperation plan entitled the "RAMOGEPOL Plan" enables the French, Italian and Monegasque authorities to cooperate in response to pollution, with the involvement of their aeronautical resources, by organising coordinated responsive action between the three countries.

The scope of the plan of intervention is known as the "RAMOGEPOL Area," and is comprised of territorial waters and inland maritime waters bordering the mainland coast of the three Contracting States, between the meridian 04°50'.5 of longitude East and the meridian 010 01'.2 of longitude East;  on land, the mainland coast as defined by each Contracting State, located within the limits indicated in the previous point;  islands located within the limits of the territorial sea referred to in the first point.

As part of this plan, an accidental pollution simulation exercise is undertaken each year;  this is the RAMOGEPOL exercise.

Secretariat of the RAMOGE Agreement