Organisation of the RAMOGEPOL Exercise "SANREMO 2020" 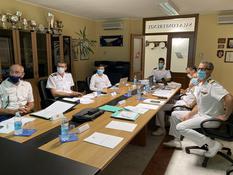 On Thursday 17 September 2020, the Italian Ministry of the Environment and the Italian Coastguards organised an anti-pollution exercise as part of the RAMOGEPOL response plan.

Due to the health situation, this simulation exercise did not involve naval and air resources.  Nevertheless, its aim was to test the co-ordination and responsiveness of the French, Monegasque and Italian authorities as realistically as possible in the case of a major pollution incident.

The scenario of this exercise, entitled "SANREMO 2020," was a simulation of a collision between an oil tanker and a yacht off the coast of San Remo, in the maritime border area of the three countries of the Agreement, causing the spillage of a large quantity of oil, threatening the Ligurian, French and Monegasque coasts.  The danger posed by this accidental pollution led to the activation of crisis centres in each country and a video conference with the competent authorities.

This exercise made it possible to check, in particular:

-          Good communication between the States of the RAMOGE Agreement,

-          The mobilisation of the REMPEC Mediterranean Assistance Unit[1]

The co-ordinated RAMOGEPOL exercises, which take place every year, are designed to optimise the use of the emergency resources deployed by the three countries to combat marine pollution.  As a reminder, their relevance and effectiveness made it possible to considerably limit the environmental impact of the collision between the ro-ro vessel Ulysse and the container ship Virginia off the coast of Corsica in October 2018.

Next year, the Mediterranean Maritime Prefecture will be responsible for organising the 2021 RAMOGEPOL exercise.