On Monday 12 April 2021, this first exhibition, the result of a photography competition launched in 2019 and comprising 19 images taken by Monaco’s international solidarity organisations, was officially unveiled by H.S.H. the Sovereign Prince on the Terrasses de Fontvieille. 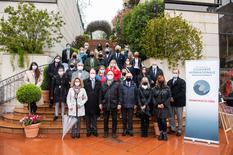 In 2019, with support from the Prince’s Government’s Department of International Cooperation, international solidarity organisations launched their first photography competition. The theme was A sustainable and empathetic perspective.

In a bid to engage with the general public and raise awareness, it was initially planned to exhibit the 19 photographs taken by participants from international solidarity organisations in spring 2020. Following a one-year delay due to the COVID-19 pandemic, the exhibition will now be open from 12 to 17 April 2021 on the Terrasses de Fontvieille, offering the general public an opportunity to come and appreciate the vitality and diversity of the organisations and the work that they do. The international solidarity organisations operate in various parts of the world and a diverse range of fields, including health, education, the environment, access to water, combatting discrimination, supporting vulnerable groups (including children, women, refugees and displaced persons) and promoting peace.

It is also possible to take a virtual tour of the exhibition and health measures mean that an entirely digital voting system has had to be set up for the Public’s Choice Prize (you can see the photographs and vote here: https://fr.surveymonkey.com/r/C8P7VNH ).

Two further awards will be presented at 5 pm on Friday 16 April at a ceremony to be attended by the Sovereign Prince:

- the Jury Grand Prix, whose winner will be selected by a panel of experts in photography and international solidarity; 1

- the Youth Prize, awarded by pupils from Monaco’s schools. 2

The International Solidary Organisation portal brings together 49 organisations in Monaco (NGOs, service clubs, foundations and groups of associations) to improve networking and help them to pool their expertise (www.osimonaco.org ).