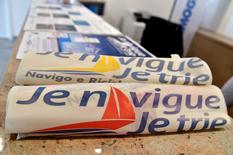 The RAMOGE Agreement has once again launched its annual summer campaign “Je navigue je trie” (“I sail, I recycle”) at the Port of Fontvieille and Port Hercule.

The aim of the campaign, which is being run in conjunction with the Department of Urban Amenities, the Société d’Exploitation des Ports de Monaco (SEPM), and Gestes Propres, is to reduce litter at sea by giving sailors bags they can use to sort and dispose of their refuse.

Since last year, at the request of the Prince’s Government, the bags handed out will no longer be made of recycled plastic but instead of a biodegradable material, thus meeting the Principality’s environmental requirements. The harbour masters at Monaco’s ports will be supplying two bags: one for recyclable waste and the other for non-recyclable rubbish.

The initiative aims to encourage everyone to respect the marine environment, and also meets the commitments made by Monaco’s ports as part of the Clean Ports certification.

I sail, I recycle and I protect the marine environment!