2018 RAMOGE Exploration campaign The Atalante Makes a Stopover in Monaco 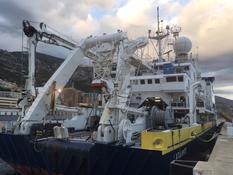 On Monday 24 September, IFREMER's oceanographic vessel, the Atalante, made a stopover in Monaco.

This ship, which is equipped with a Victor 6000* ROV, was made available by the Mediterranean Maritime Prefecture for oceanographic research carried out under the RAMOGE Agreement.

For seven days (from 18 to 24 September), the Atalante explored the waters of the RAMOGE area, at a depth of more than 2000 m.

Using the Victor 6000, which is equipped with investigative tools (such as cameras, pincers and vacuum suction for extraction/sampling and taking sediment cores), eight areas of ecological interest within the RAMOGE area were explored in precise detail.

This campaign made it possible to collect data on the habitats and species that are present in these deep areas and gather information on the pressures facing these areas of ecological interest (especially with regard to the accumulation of waste).

The team of scientists** took the opportunity of this stopover in the Principality to report on their work to the authorities and to representatives of the three member countries of the RAMOGE Agreement.

Once the scientists have processed the data, the RAMOGE Agreement will announce the results of the state of conservation of biodiversity in the area, enabling recommendations on conservation measures to be made.

**The team is comprised of scientists from the three countries of the Agreement, from the following research organisations:  the French Agency for Biodiversity, Ifremer, the National Museum of Natural History, GIS Posidonie, the CPIE, ISPRA, the University of Genoa, Monaco's Department of the Environment and the Monaco Scientific Centre.