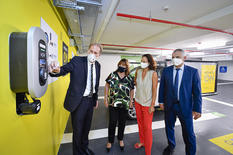 Marie-Pierre Gramaglia, Minister of Public Works, the Environment and Urban Development, visited the Portier car park to see the electric service station with its new "MONACO ON" design. The spaces dedicated to recharging electric vehicles can now be identified by their bright yellow colour.

In August 2020, the number of electric and hybrid vehicles in the Monegasque fleet represented almost 7%. Charging needs are increasing, as is the charging power required. A conventional charging socket with a maximum of 25 kWh is half the capacity of the latest Zoé and almost four times less than the capacity of top-of-the-range vehicles.

The government is gradually replacing self-service charging units in public car parks and on the roads with electric service stations with several terminals. The aim is to meet the demand for more powerful, faster and more widely available recharging. The Casino, Grimaldi Forum and Portier car parks are already equipped; the car park at the Fontvieille Shopping Centre will be equipped shortly. A total of 91 quick-charging terminals have been, or are being, installed (71 7kva terminals and 20 22kva terminals). On the roads, nine sites offer 11 fast-charging stations, seven semi-rapid charging stations and four slow-charging stations.

The charging points were already free and easy to use; the terminals will be more efficient and more easily identifiable.

Installation will continue in the coming weeks on the public highway, with dedicated, free and easily accessible areas (near shops and busy places). As in public car parks, the terminals will eventually be given a new yellow graphic design that will make them more visible.

Marie-Pierre Gramaglia recalled that "Ecological vehicles are to be favoured in an urban area such as ours. It is with this in mind that the Government is now developing an ever wider and more efficient network of charging stations, which are gradually being given a new look to make them easier to identify, thanks to the MONACO ON brand."

As a reminder, since 1994, the Prince's Government has been pursuing a particularly attractive policy to promote electromobility - the measures aimed at encouraging their use including a purchase subsidy, free charging, a reduction on season tickets for public car parks, free overground parking and a free annual car tax sticker. To support their increasing use in the car fleet, almost 1,000 free charging points (for 4- and 2-wheelers) are, at this stage, available in the Principality's public car parks. Eleven public quick-charging points are available on the roads. All Monegasque residents are located within easy reach of a public charging point – within 300 m - which is free of charge.

The deployment of charging points for electric vehicles is therefore continuing. 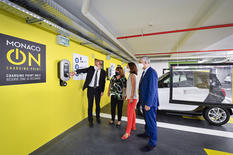