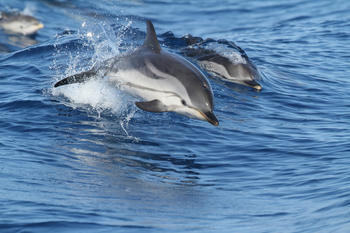 On the occasion of the signing ceremony for the Headquarters Agreement between the Government of H.S.H. Prince Albert II, the Permanent Secretariat of the Pelagos Agreement* and member countries of the Agreement, a lecture and show will be organised on 3 April 2017 during Monaco Ocean Week on the subject of the Sanctuary for Marine Mammals.  It will take place at 7.30 p.m. at the Oceanographic Museum of Monaco.  The lecture is open to the public (booking required) and will be followed by the show "Whale and Double Bass") ("Baleine et contrebasse") by Bernard Abeille.  Further information: www.pelagos-sanctuary.org

*The Pelagos Agreement, which was signed by France, Italy and the Principality of Monaco on 25 November 1999 in Rome, concerns the creation of a Sanctuary to protect marine mammals and their habitats from all anthropogenic threats.  The Sanctuary consists of a pilot area of the Agreement on the Conservation of Cetaceans of the Black Sea, the Mediterranean Sea and Contiguous Atlantic Area (ACCOBAMS) and is recognised as a Specially Protected Area of Mediterranean Importance (SPAMI).  The Pelagos Sanctuary is the only international Marine Protected Area in the Mediterranean that is devoted to the protection of marine mammals.