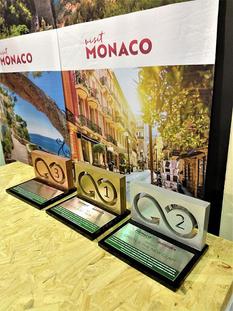 Monaco’s Representative Office in Brazil took part in the Gramado Summit, Brazil’s leading conference on innovation and the associated and highly diversified start-up ecosystem, which was held from 31 July to 2 August 2019 near Porto Alegre. Some 200 exhibitors and close to 2,500 visitors a day attended the summit.

Serving as a member of the jury for this innovation-focused summit enabled the Representative Office to boost the Principality’s reputation and visibility as a responsible, committed destination, and to approach start-ups which share the same vision.

The first “Green Is the New Glam” Award, named after the promotional campaign conducted by the Principality’s Tourist and Convention Authority, was presented to an innovative start-up working in the field of sustainable development, creating a stir at the conference and among the accredited Brazilian media.

Of the ten shortlisted finalists, it was Navegue which walked away with the prize promoted by Monaco. The company was recognized for its mobile app that is designed to bring together sailors and passengers with an interest in environmentally friendly transport on the Capibaribe River. The Capibaribe flows through Recife, Brazil’s fifth largest metropolitan area, where Navegue organises and facilitates “ride-sharing on the river”.

Installation of solar panels on the roof of Saint-Nicolas Church