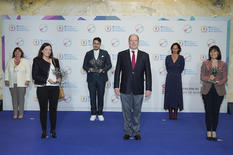 The Annual Energy Transition Conference was held on Monday 10 May, attended by H.S.H. the Sovereign Prince and Marie-Pierre Gramaglia, Minister of Public Works, the Environment and Urban Development.

Broadcast in a fully digital format for the first time and held under the theme A Zero-Waste Lifestyle?, the aim of the conference was to remind people that the topical issue of waste lies at the heart of the challenges we face in the energy transition, since it is responsible for a third of the Principality’s CO2 emissions.

The Mission for Energy Transition therefore decided to base the event around this issue in order to highlight some national and international initiatives. There are many such initiatives, and though they are sometimes invisible to the general public, they are nonetheless important drivers of action in reducing waste at source.

The well-organised, fast-paced conference began with an assessment of the energy transition in the Principality presented by the Minister.

The Mission for Energy Transition then had the honour of welcoming Blandine Surry, General Manager of start-up The Loop for a virtual discussion on “When our waste becomes a resource”.

A pioneer in the return and reuse of packaging, The Loop is working in partnership with Carrefour France to make the move from e-commerce to physical stores and introduce the circular economy to the retail sector with the help of a sophisticated packaging return system. It is revolutionising the economic model for packaging by giving it value.

Next, H.S.H. the Sovereign Prince awarded a trophy in the form of an olive tree made from recycled metal by artist Joel Rebière to the three projects which received the most votes in the competition organised by the Mission for Energy Transition to identify the best Monegasque waste-reduction initiative (full details are available below). The trophies were presented to:

Closing the virtual event, H.S.H. the Sovereign Prince said: “Is a zero-waste lifestyle possible? Perhaps the right question is, do we have a choice? Can we sustain this waste-generating economy with 7 billion people on the planet? The answer is no. [...] The effort is now underway; the state of the planet and the oceans requires no less, consumers are demanding it, industry is taking action, new models are being rolled out as illustrated by the work of The Loop that Ms Blandine Surry has just told us about, and by those who are leading initiatives in Monaco, whose commitment I salute. They have shown us that a different approach is possible. [...] It’s not about dreaming of a future perfect world, we need to find the means to make it possible, and I firmly believe that these means are in our hands.”

A recording of the conference will very soon be available to view on the Mission for Energy Transition websites – transition-energetique.gouv.mc and pacte-coachcarbone.mc – and social media pages (Facebook, Instagram, LinkedIn).