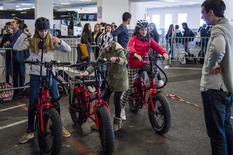 The event was held on Tuesday 5 February 2019 in the Parking des Pêcheurs car park, and featured all the main types of electric transport, with a focus this year on electric bikes.

There were three activities based around this eco-friendly means of transport, reflecting the subsidy recently introduced by the Prince’s Government:

*  A road safety workshop led by the Police Department

These were complemented by a further two activities:

In addition to the chance to try out the electric vehicles, the aim of the day was to raise pupils’ awareness of the need to look after the environment by reducing the pollution caused by road transport, and of the concept of multimodal transport. In preparation for the event, all Year 9 pupils took part in a lesson focused on these topics.

At the end of the day, they were invited to take part in the Jeun’Elec Competition for the 2018–2019 school year. The idea of the competition is to devise a slogan and design a logo to promote electric transport.

The prize ceremony will be held during the EVER Forum at Grimaldi Forum on 9 May.