Presentation of the Rolex Monte-Carlo Masters 2020 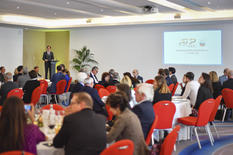 On Tuesday 11 February 2020, Zeljko Franulovic, the Tournament Director, gave an overview of the 114th Rolex Monte-Carlo Masters, which will take place from 11 to 19 April 2020 on the clay courts of the Monte-Carlo Country Club.

After a reminder of the highlights of the previous event, the Tournament Director announced that the ATP has selected the Rolex Monte-Carlo Masters to receive "the Award of Excellence for the most improved venue in 2019."  This award recognises all the new infrastructures that were inaugurated last year, including a restaurant and a lounge for the players and an interview room.

The 2020 event will see the opening of a cocktail bar in place of the Rolex Boutique on the terraces of the Monte-Carlo Country Club.  The American artist Lee Wybranski is designing this year's poster.

A mini-tennis exhibition match will be held on Saturday 11 April in the new gardens at the Place du Casino, featuring the two best players of the tournament.

As for the players, Zeljko Franulovic stated that "Alongside the world's No. 1 and No. 2 players, Novak Djokovic and Rafael Nadal, who have already registered, we are preparing to host the world's best players, as we do every year.  The final official list of players will be available on our website from 19 March."

The 114th Rolex Monte-Carlo Masters will be launched by the title holder, Fabio Fognini, at the draw, which will take place on the terraces of the Thermes Marins de Monte-Carlo on Friday 10 April at 6.30 p.m.  It will be broadcast live on Monaco Info and on the channel's Facebook page.

Alain Manigley, President and CEO of the SMETT, also announced that Chris Kermode, the former CEO of the ATP World Tour, has been appointed as a special consultant to the Rolex Monte-Carlo Masters organising team.

The Rolex Monte-Carlo Masters is organised by the Société Monégasque pour l'Exploitation du Tournoi de Tennis (S.M.E.T.T.), and is the first European tournament in the ATP Masters 1000 category.