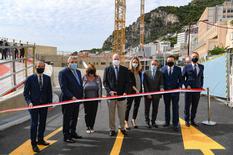 On Wednesday 30 September 2020, as part of construction work on the new Princess Grace Hospital (NCHPG), a new road and pedestrian walkway were inaugurated by H.S.H. the Sovereign Prince. The Prince was accompanied by H.E. Mr. Pierre Dartout, Minister of State, Marie-Pierre Gramaglia, Minister of Public Works, the Environment and Urban Development, Didier Gamerdinger, Minister of Health and Social Affairs, Stéphane Valeri, President of the National Council, Georges Marsan, Mayor of Monaco, and Benoîte de Sevelinges, Director of the CHPG.

This new section of road, which is approximately 200 m long, has now been completed, from the entrance to the CHPG near the exit of the tunnel (by the Caroubiers) to the Tamaris. It will enable the NCHPG construction site to progress in the area next to the mountains. This road also changes pedestrian traffic; pedestrians can now use the Avenue Pasteur once again, with a new pavement and appropriate signage.