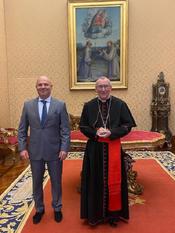 Following on from the visit to Monaco in July of His Eminence Cardinal Pietro Parolin, Mr Laurent Anselmi, Minister of Foreign Affairs and Cooperation, recently travelled to Rome.

The Minister was received by the Secretary of State to His Holiness Pope Francis, who once again hailed the excellent state of the special bilateral relationship between the Holy See and the Principality.

Mr Anselmi also had a chance to meet His Eminence Cardinal Paul Richard Gallagher, Secretary for Relations with States, and Sister Alessandra Smerilli, Secretary of the Dicastery for Promoting Integral Human Development.

These productive discussions highlighted the common understanding shared by the Holy See and the Principality on a range of issues, including those addressed by multilateral forums relating to ethics viewed through the lens of Christian morality, and to the environment.

During his visit, the Minister was also invited by His Eminence Cardinal Fernando Filoni, Grand Master of the Equestrian Order of the Holy Sepulchre of Jerusalem, to a meeting involving Mr Léonardo Visconti di Modrone and Jean-Pierre de Glutz-Ruchti, Governor General and Vice-Governor General of the Order respectively.

Coming after Cardinal Filoni’s visit to Monaco in October, the meeting provided an opportunity to review the cooperation between the Order and the Principality on projects developed in the Holy Land in the fields of education and, more broadly, support for vulnerable groups.

Throughout these meetings, Mr Anselmi was accompanied by H.E. Mr Claude Giordan, H.S.H. the Prince’s Ambassador to the Holy See.