In the presence of H.S.H. Prince Albert II and to mark Mediterranean Day on 28 November, H.R.H. the Princess of Hanover formally opened a symposium on “Employment of Young People and Women in the Mediterranean Region”, at the Oceanographic Museum of Monaco.

In a vibrant speech, H.R.H. the Princess of Hanover reminded the audience that Mediterranean Day served as a reminder to focus on the most vulnerable. A combination of economic instability, energy crises, and climate change is leading to increased migratory flows, and has seen more than two million refugees and migrants cross the Mediterranean in the last eight years, often risking their lives in the process.

Faced with this tragedy, H.R.H. the Princess of Hanover called for the adoption of policies that respect fundamental rights. She paid tribute to the solidarity and commitment demonstrated by the Principality to contribute to joint efforts. At the behest of H.S.H. Prince Albert II, the Prince’s Government has given support to displaced people and refugees through the United Nations, the Council of Europe, and the OSCE.

H.R.H. the Princess of Hanover also highlighted the collective efforts made by civil society, including the World Association of Children’s Friends (AMADE), of which She is the President, and the Community of Sant'Egidio which works to help the most vulnerable migrants in Italy.

In her speech, Ms Isabelle Berro-Amadeï, Minister of Foreign Affairs and Cooperation, emphasised the commitment reflected in Monaco’s international development policy, with actions carried out with eleven partner countries in areas ranging from healthcare and food security to socio-economic inclusion and education. She noted that over the last four years, more than a million women and girls have benefited from the policy.

Guest of honour, H.E. Mr Nasser Kamel, Secretary General of the Union for the Mediterranean (UfM), stressed that the number one concern for the Mediterranean region was the education and employment of young people and especially women, notably in the emerging sectors of the green, blue, and digital economy. “These young people and these women are the Mediterranean’s greatest assets - offering them opportunities for the future is not just about economics, it is a duty,” he added. The Secretary General hailed the tripartite agreement signed with the United Nations Industrial Development Organization (UNIDO) and Monaco to support women entrepreneurs in Tunisia.

The Union for the Mediterranean aims to promote dialogue and encourage the sharing of best practices. The day included presentations of:

- initiatives to promote professional training leading to qualifications and job creation schemes sponsored by stakeholders including UNODI, the European Institute for Cooperation and Development (IECD), and the Mediterranean New Chance network.

- training programmes for careers in the field of heritage and preservation of cultural assets developed at UNESCO, the International Centre for the Study of the Preservation and Restoration of Cultural Property (ICCROM), and the non-profit association ‘Co-Développer le Patrimoine’ (Co-PAM);

- restoration projects such as those undertaken in Lebanon and Syria, as part of a funding agreement between Monaco and the International alliance for the protection of heritage in conflict areas (ALIPH). A photography exhibition is currently on display in the Saint Martin gardens in Monaco-Ville, until the end of December 2022.

Finally, the voice of women involved in scientific and literary research was heard at the biennial Rencontres Internationales Monaco et la Méditerranée.

On 24 November, in the run-up to “Mediterranean Day”, Isabelle Berro-Amadei, Minister of Foreign Affairs and Cooperation, accompanied by H.E. Catherine Fautrier, Ambassador of Monaco to Spain, attended the 7th Regional Forum of the Union for the Mediterranean in Barcelona. Foreign Ministers from across the Euro-Mediterranean region came together for the annual event, which was co-chaired by the Hashemite Kingdom of Jordan and the European Union.

On the eve of the Forum, José Manuel Albares, the Spanish Minister for Foreign Affairs, the European Union and Cooperation, invited all of the Heads of Delegation to an opening dinner. He said that the Forum was crucial to the future of the UfM given the present geopolitical instability, and emphasised the importance of cooperation and dialogue between Mediterranean States in the current climate.

The Regional Forum opened with the adoption by the 42 Member States of the Ministerial declaration on North Macedonia’s accession to the UfM.

During the meeting, the participating countries agreed to step up integration, adaptability and cohesion within the Mediterranean region, to reduce imbalances in development between the north and south. They also highlighted the need for enhanced connectivity across the region, with more integration of infrastructures and regulations to promote the development of trade and to control immigration. More resources should be devoted to training and employment for young people and women, to enable them to access the jobs market, promote entrepreneurship, and contribute to the region’s economic growth.

Finally, following COP27, the Mediterranean countries reiterated the urgent need to work together for the adoption of shared policies on environmental protection, the blue economy, and sustainable development.

In her speech, the Monegasque Minister underlined the commitment shown by the Principality of Monaco in this area, and the target set by H.S.H. Prince Albert II of achieving carbon neutrality by 2050. “Combining environmental protection and sustainable development is one of the greatest challenges we face. These two elements are key factors for geopolitical stability and peace in our region. That is why, now more than ever, we must develop a Union that is efficient and innovative,” she concluded. 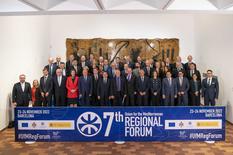