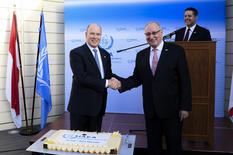 H.S.H. the Sovereign Prince, Aldo Malavasi, Deputy Director General of the IAEA and Head of the Department of Nuclear Science and Applications and David Osborn, Director of the Agency's Environmental Laboratories in Monaco,© Direction de la Communication / Manuel Vitali

On Friday 19 October 2018, in the presence of H.S.H. the Sovereign Prince and many dignitaries, the International Atomic Energy Agency's (IAEA's) environmental laboratories celebrated the 20th anniversary of their establishment in premises on the Quai Antoine 1er.

More than 30 Ambassadors to the Agency in Vienna were present for the occasion.

In his speech, H.S.H. the Sovereign Prince emphasised that "This evening, we are also celebrating, with all the recognition it deserves, a major institution for understanding and protecting the environment - the IAEA's Environmental Laboratories. "

The Principality of Monaco played a decisive role in creating these Laboratories, two years after an international conference was held in the Principality on the discharge of radioactive substances at sea.

Under the impetus of Prince Rainier III, the holding of this Conference confirmed the shared wish of Monaco and the IAEA to host a research and study centre that would use cutting-edge techniques from nuclear physics to monitor and promote the quality of the environment and the marine environment, which were already threatened by human activity.

This was how the IAEA Laboratories, a structure of the Agency's Department of Nuclear Sciences and Applications, were brought into being.  Founded in 1961 at the Oceanographic Museum of Monaco, they were initially envisaged as a three-year programme for monitoring marine radioactivity, in partnership with the Oceanographic Museum and the Prince's Government.  As requests for collaboration from IAEA Member States increased, the laboratories were transferred to their current premises in 1998.

Until 2010, this major scientific research unit was devoted to the marine environment.  Since then, its activities have been extended to include the terrestrial environment, thus becoming the IAEA's Environmental Laboratories.

These Laboratories develop tools to help the Agency's member States monitor the environmental impact of radionuclides, trace elements and organic contaminants in the marine environment and measure the impact of climate change on the environment

This Centre serves the scientific community, political decision-makers, universities, the media and the general public by facilitating, promoting and communicating international action and research in this field.