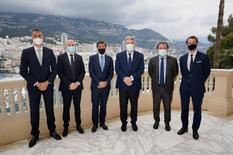 Minister of State Pierre Dartout welcomed Guillaume Deroubaix and Mathieu Balzarini, the Deputy Executive Director and Director of Technology and Information Systems for LexisNexis France respectively, to discuss the launch of a project to redesign the Légimonaco website.

The website was created in 2008 and is the public interface for the government’s policy on disseminating Monegasque law. It publishes Monaco’s legal codes as well as the major legislative texts and updated regulations. The website also enables users to consult the case law established by the Principality of Monaco’s courts.

Following a period of consultation with firms who specialise in legal publishing, the Prince’s Government selected the LexisNexis group to design and implement the new Légimonaco site. LexisNexis is a world leader in this field and, for this project, has teamed up with the IT services company Sword, which has previously worked on government legal websites for France and Luxembourg. Delivery of an initial version of the Monegasque website is scheduled for late 2022.

As the Minister of State explains, “it is vital that we make the law accessible to everyone, because it naturally governs our daily lives. With the National Council having voted in favour of the necessary appropriations, the Prince’s Government intends to create a new-generation tool featuring a highly effective search engine, new content and enhanced functionality compared with the current version. This will better meet the needs of the legal profession and the general public.”

The Government was also keen to involve the Department of Justice in the project, for the section devoted to court rulings.

For Arnaud Hamon, Director of Legal Affairs, who is responsible for the project with support from the Government’s Digital Services Department, “the comprehensive redesign of Légimonaco aims to ensure that Monegasque law is disseminated more effectively. Access to law is vital to a democratic society and forms part of the very concept of the rule of law. The Légimonaco project has also been designed to be consistent with the digital transition on which the Prince’s Government has embarked to make the Principality more attractive.”