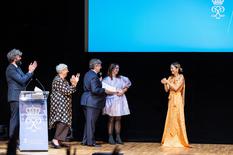 The winners of the 2022 Prince Pierre Foundation prizes were announced at the award ceremony held at the Opera Garnier in Monaco on Tuesday 11 October. The ceremony was attended by the Foundation’s President, H.R.H. the Princess of Hanover. The International Contemporary Art Prize was awarded to Christine Sun Kim for The Star-Spangled Banner (2020). The winner of the Research Grant was DAAR.

The Star-Spangled Banner (2020), a video of which was screened during the ceremony, will be presented at the Casa Encendida de Madrid from 10 November 2022 to 26 February 2023, alongside a further two works by the artist. The Foundation will stage the exhibition during the International Contemporary Art Fair (ARCO).

The International Contemporary Art Prize was awarded for the first time in 1965 and has been hosted by the Prince Pierre of Monaco Foundation since 1983. Since 2005, it has been presented every three years, with the winner selected by the Art Council on the basis of nominations from international experts from the arts world.

The winner is awarded a prize of €75,000, including funding for the creation of an original work.

For the 2022 International Contemporary Art Prize, each member of the Council chose three sponsors, all international experts, and asked them to present a piece created during the previous two years and considered to be the most accomplished and most representative work by an artist.

Put forward by artist David Horvitz, the selected work by Christine Sun Kim was created when she performed the United States national anthem in American sign language (ASL) at the Super Bowl in February 2020, to an audience of millions of television viewers.

David Horvitz said: “I am pleased to nominate The Star-Spangled Banner for the International Contemporary Art Prize. The work combines several aspects of her practice (her voice). It sits at the intersection of various platforms via which it spreads and is amplified. It is both a drawing and a translation from English into ASL. It is a document, a benchmark.”

For Cristiano Raimondo, the Artistic Director for the International Contemporary Art Prize, “Kim builds a work where the signs, gestures and their signifiers are constantly being enriched, creating a bridge between the hearing and deaf worlds by constructing an artistic language that moves from the sign to the graphic and from the graphic to representation of the music. A musical note cannot be fully contained and expressed on paper, and the same is true of a concept translated by ASL: both are considered to be spatial and modulated, such that the slightest modification can change their meaning.”

In addition, a Research Grant was awarded for the first time this year. This grant supports an artist, an institution, a collective or an art historian with a current or forthcoming research project linked to the Mediterranean region. The prize was awarded to DAAR – Decolonizing Architecture Art Research.

The artistic practice of DAAR – Sandi Hilal and Alessandro Petti – lies somewhere between architecture, art, education and politics. Over the last two decades, they have developed a series of research projects which are both theoretically ambitious and practically engaged in the struggle for justice and quality.

During the award ceremony, Vénus Khoury-Ghata was also declared to be the winner of the Literary Prize. The Discovery Grant was awarded to Thomas Louis for his first novel, Les Chiens de faïence (The China Dogs), published by La Martinière. The High-School Pupils’ Favourite Choice prize went to Marie Vingtras for her first novel, Blizzard, published by L’Olivier.

The Young Music Fans’ Favourite Choice award went to York Höller for his Viola Concerto (2016–2017) and the Musical Springboard prize was awarded to the Kyiv Symphony Orchestra.

The Principality Prize, awarded jointly by Philosophical Encounters of Monaco and the Prince Pierre of Monaco Foundation, was presented to Philippe Descola, for his entire body of work.