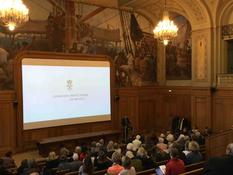 Eric Ruf, General Director of the Comédie-Française, gave a talk at the Maison des Océans in Paris last night as part of the Prince Pierre Foundation’s series of conferences held outside Monaco. The theme of his talk was “The theatrical professions”.

The next conferences in this Prince Pierre Foundation series will take place on 13 June at the European Court of Human Rights in Strasbourg and on 6 July in Matignon, Côtes-d’Armor (Brittany). In Strasbourg, Dean Spielmann will discuss “Art and Human rights”, and in Matignon, Thomas Fouilleron will give a presentation on “Princes and Princesses of Monaco: the Advent of a Dynasty”.