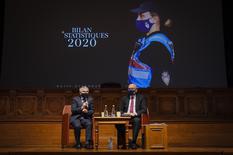 Police Commissioner Richard Marangoni today presented to the press a report on the Police Department’s activities during 2020 and the statistics for the year. His presentation was also attended by Minister of the Interior Patrice Cellario and members of the police general staff.

The Commissioner began by noting that it had been a unique year marked by the COVID-19 epidemic. This had resulted in the mobilisation of the entire police force to ensure compliance with the various health rules enacted since the start of the pandemic. Since March 2020, 24,415 checks had been carried out, resulting in 19,299 warnings and 5,116 fines.

He then presented the crime statistics for 2020, which had seen a significant decrease:

Richard Marangoni also discussed the changes that had occurred over the previous year in accordance with his Police 2020 plan. He then noted the creation of the Quality of Life Preservation Unit, the delivery of the Princesse Gabriella launch, and the upward extension and renovation of the Police Department’s premises. Finally, he paid tribute to the 88 women working in the Police Department, two of whom had been promoted to positions of responsibility, and expressed his gratitude to all staff for their success in carrying out the challenging tasks of recent months.