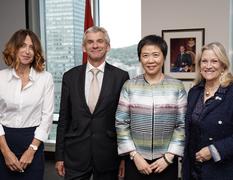 The Principality of Monaco took part in the 40th Assembly of the International Civil Aviation Organisation (ICAO), held in Montreal from 24 September to 4 October. The country was represented by Dr Diane Vachon, Monaco’s Consul General in Montreal and Permanent Representative to the ICAO, and Bruno Lassagne, Director of the Monaco Civil Aviation Authority.

The Principality urged the Assembly to adopt ambitious resolutions on protecting the environment, particularly through promoting the use of alternative aviation fuels and through continuing with the CORSIA programme, which commits ICAO member states to reducing and offsetting their CO2 emissions from aviation. The Monegasque delegation also spoke on the issue of airport safety, advocating the maintenance of a high level of safety at international airports.

The delegation took advantage of the occasion to present the brand new Unmanned Traffic Management (UTM) platform, developed by Air Space Drone and recently installed in the Principality, to a number of countries with an interest in drone traffic. The presentation was jointly organised and funded by Monaco and Air Space Drone, and held within Monaco’s Consulate General in Montreal, with attendees including Dr Fang Liu, Secretary-General of the ICAO. It allowed representatives from the Principality to discuss the issue of compatibility between traditional and remote-controlled aircraft with some of their foreign peers. These senior civil aviation officials from several continents were also able to obtain information from the Air Space Drone managers about the technologies used in Monaco and the innovative developments still to come.

A number of contacts were made between the Monaco Civil Aviation Authority and some of its foreign counterparts with an interest in Monaco’s experience of managing drone traffic.