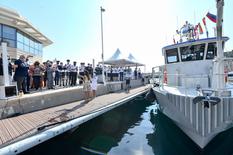 Today, in the presence of H.E. Mr. Pierre Dartout, Minister of State, Marie-Pierre Gramaglia, Minister of Public Works, the Environment and Urban Development, and Patrice Cellario, Minister of Interior, the Department of Maritime Affairs (DAM) unveiled its brand new vessel - the VITAMAR III.

Following a presentation speech by Armelle Roudaut-Lafon, Director of the DAM, Msgr. Dominique-Marie David, Archbishop of Monaco, officially blessed the monohull.   Leticia de Massy, the ship’s godmother, christened her with Champagne, as is customary in the marine world.

The VITAMAR III was purchased for the sum of EUR 1,500,000.   The ship is an aluminium monohull, built in 2019 at the "Transmetal Industries" shipyard in the Var.  Her main roles will be coastal maintenance and buoyage, combating marine pollution, environmental protection, checks at sea and firefighting.  She completes the DAM's fleet, which is comprised of two RIBs, the SAINTE-DEVOTE 2 and the CORALLIUM 2, both acquired in 2014.

The Principality Will Restrict Access to Restaurants from 2 January at 7 p.m.

Preliminary budget for 2021 will show deficit of €114.5 million : “The goal is to safeguard Monaco’s economic and social model”