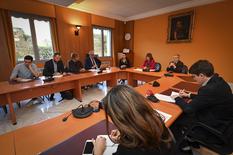 Ms Marie-Pierre Gramaglia, Minister of Public Works, the Environment and Urban Development, and Mr Patrice Cellario, Minister of the Interior, presented the new regulations covering bicycles and personal transporters to the press.

In light of the growing use of new, effective, quick and less polluting forms of transport such as electric bikes and personal transporters, the introduction of new traffic regulations was required to ensure that these vehicles can co-exist peacefully alongside traditional means of transport, in terms of safety, facilities, the sharing of public space and road improvements.

“The Prince’s Government drew on the expertise of some 40 representatives from institutions and associations to conduct a review which aimed to establish rules of use that would improve both this rapidly changing form of transport and the safety of all users,” explained Marie-Pierre Gramaglia.

A number of measures have been adopted: all cyclists up to the age of 18 must wear a helmet, the use of bus lanes by bicycles is now permitted, and the age limit for the use of Monabike has been reduced from 16 to 14.

Electric scooters may now be used, with the following mandatory regulations: helmets must be worn by all users under 18, and retro-reflective clothing or devices must be worn. Scooters must be equipped with brakes, a bell, lights and a reflective device. They may be driven on the road, in bus and cycle lanes and on cycle paths. They are not, however, allowed on pavements unless they are being pushed by hand.

Users of non-powered transporters (skateboards, roller blades, non-powered scooters) are considered to be pedestrians and must therefore travel on pavements. Hoverboards, Segways and powered unicycles are prohibited from travelling on the road but may be used on cycle paths and in cycle lanes.

These measures will be implemented over the coming weeks.