The Meeting of the High-Level Political Forum on Sustainable Development, convened by the UN Economic and Social Council (ECOSOC), is being held at the UN headquarters in New York from 17 to 19 July.

On Monday 17 July, Minister of State Serge Telle gave a presentation at the meeting on the national voluntary review of Sustainable Development Goal (SDG) implementation prepared by Monaco’s Government. 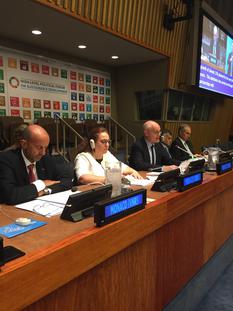 Jean-Marie Véran, Special Advisor to the Minister of Foreign Affairs and Cooperation, Isabelle Picco, Monaco’s Ambassador Extraordinary and Plenipotentiary to the United Nations, and Serge Telle, Minister of State, at the UN forum © DR

Emphasising the importance of collective action to transform the world through the 17 goals, which cover hunger, poverty, disease, inequality, ignorance, injustice, irresponsible growth, climate change, environmental damage, and the destruction of the oceans, he stated that: “Monaco devotes more than 1.1% of its income to official development assistance (...) and more than 65% of its funding to seven of the least developed countries in the form of donations.”

The Minister concluded: “At its own scale and within its means, Monaco seeks to be resolute and responsible.”

The Minister of State’s full speech is attached; Monaco’s national voluntary review can be consulted via the Government’s Internet portal, www.gouv.mc .