WHO – 5th high-level meeting of small countries of Europe 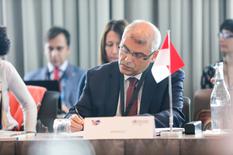 © - Ministry of Foreign Affairs and Cooperation

A Monegasque delegation comprising Isabelle Rosabrunetto, Director General of the Ministry of Foreign Affairs and Cooperation, and Alexandre Bordero, Director of Health Affairs, took part in WHO’s fifth high-level meeting of small countries of Europe, held from 25 to 27 June 2018 in Reykjavik (Iceland).

The theme of this year’s meeting was “working together for better health and well-being for all”.

Discussion of environmental and health challenges, with a particular focus on climate change and water, formed a significant part of the debate. Ms Rosabrunetto indicated that the Prince’s Government had rolled out a national policy which would help to rationalise water consumption. Like other countries in the Mediterranean, the Principality of Monaco could increasingly find itself facing periods of drought.

Dr Bordero highlighted the various communications campaigns which have been launched to raise public awareness in Monaco about some health issues (heatwaves, mosquitoes, vaccination, nutrition, etc.) as well as best practice in this area.

The fifth high-level meeting drew to a close with the adoption of a political declaration entitled “guaranteeing access to reliable and climate-change resilient water and sanitation”.