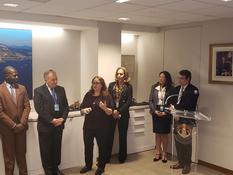 H.E. Ms Isabelle Picco, Monaco’s Ambassador and Permanent Representative to the United Nations, accompanied by a delegation,* is currently taking part in the second meeting of the Intergovernmental Conference on Marine Biodiversity of Areas Beyond National Jurisdiction (BBNJ), which is being held in New York until 5 April 2019.

The main points advocated by the Principality in this process of conservation and sustainable use of marine biodiversity are the establishment of a network of management tools by zone, particularly for marine protected areas, the role of science, capacity building, the need to cooperate, and the promotion of any provision that helps to preserve the marine environment, its ecosystem and its biodiversity.

Monaco co-organised two parallel events in the margins of the discussions. The first (26 March) was organised with the Global Ocean Forum, a longstanding partner on themes associated with the oceans and climate change, and focused on capacity building. The second (27 March) was organised with France, the Alliance of Small Island States, the Tara Expeditions Foundation, the International Union for Conservation of Nature, Harvard University and the International Council of Environmental Law, and considered the involvement of different stakeholders in the field of marine genetic resources.

A reception was also held at the Permanent Representation’s premises, attended by the Conference President Ms Rena Lee, Ambassador for the Oceans and the Law of the Sea and Special Envoy of the Ministry of Foreign Affairs of Singapore. The reception gave the many delegates an opportunity to continue their discussions in an informal setting. Ambassador Isabelle Picco, French Ambassador for the Oceans Serge Segura, the Belizean Ambassador Lois Young, President of the Alliance of Small Island States, and André Abreu, Environment and Climate Manager for Tara Expeditions, emphasised the importance of science, partnerships and the private sector in the conservation and sustainable use of the oceans.

The aim of this second session of the Intergovernmental Conference is to continue to work towards a new, binding international agreement that will complement the system established by the United Nations Convention on the Law of the Sea. The next session will be held in New York in August.