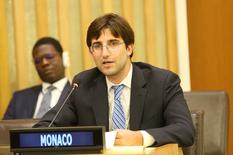 Florian Botto, Third Secretary at the Permanent Mission of Monaco to the United Nations in New York ©DR

The Principality of Monaco took part in the opening of the first session of the Intergovernmental Conference to draft a new treaty for the conservation and sustainable use of marine biodiversity in areas beyond national jurisdiction.  This session is currently taking place in New York and will continue until 17 September.  This represents an historic milestone for this process, which was initiated many years ago.

In its speech, the Principality asserted that this work should ultimately lead to an ambitious Agreement, which will complement the existing regime, established by the United Nations Convention on the Law of the Sea.

Among the many topics addressed, the Principality made its voice heard in particular with its speech on the creation of marine protected areas in the high seas through global standards and processes.  The Monegasque delegation is actively engaged in the work for this process, with the two-fold aim of ensuring the effective protection of marine resources and the marine environment and their sustainable use by future generations.