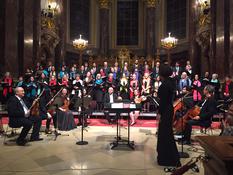 "Concert Without Borders – Under the Same Sky" ©DR

Thanks in particular to the generous support of the Embassy of Monaco in Germany, the Diplomatic Choir of Berlin gave a concert entitled "Concert Without Borders - Under the Same Sky" on Thursday 23 May at the Berliner Dom, to more than 700 guests, including Ambassadors and representatives of Berlin's political, economic and cultural circles.

Spiritual music from the Christian, Jewish and Arab-Islamic cultures was performed by singers and musicians of more than 20 nationalities, many of whom are part of Berlin's diplomatic community.

This aim of this concert was to promote music as a vehicle for friendship and mutual understanding across religious and cultural borders.  It was held under the high patronage of Germany's Minister of Foreign Affairs, Heiko Mass.