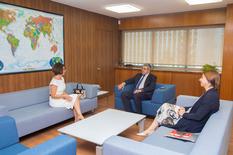 H.E. Ms. Catherine FAUTRIER-ROUSSEAU was received by the Secretary-General of the World Tourism Organization (UNWTO), Mr. Zurab POLOLIKASHVILI, and Ms. Alessandra PRIANTE, Director of the Regional Department for Europe. The Ambassador of Monaco to Spain has also been the Permanent Representative of Monaco to this Organization since 18 March 2021.

The situation concerning the recovery of the tourism sector following the pandemic was, of course, discussed at this meeting and will be covered extensively at the next UNWTO General Assembly, which is due to take place in the autumn.

At this meeting, the Ambassador also took the opportunity to discuss possible areas of collaboration with the UNWTO on issues such as the need to promote sustainable tourism.

The discussions focused in particular on the Global Tourism Plastics Initiative and the "One Planet" programme.  H.E. Ms. Catherine FAUTRIER-ROUSSEAU assured the Secretary-General of the Principality's support for both these initiatives.