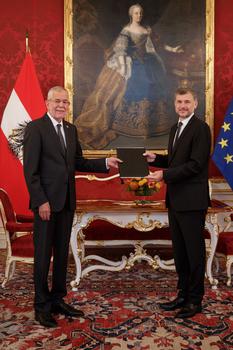 On Wednesday 30 September 2020, the new Ambassador of the Principality of Monaco to Austria, H.E. Mr. Frédéric Labarrère, presented his Letters of Credence to the Federal President of the Republic of Austria, Mr. Alexander Van der Bellen.

The Official Ceremony took place in Vienna, at the Hofburg Imperial Palace, the official residence of the Austrian President.

At a meeting after the ceremony, Mr. Alexander Van der Bellen expressed his appreciation for the commitment of H.S.H. the Sovereign Prince to environmental protection, a commitment he shares, and the various ways in which He supports this cause.  The Austrian President also reaffirmed Austria's ecological objectives for the coming decades, in particular through the production of electricity from renewable energy sources by 2030 and carbon neutrality by 2040.  For his part, the Ambassador referred to the ambitious initiatives undertaken by the Prince's Government in this field and expressed his desire to strengthen and deepen the longstanding close and friendly links between the Principality of Monaco and the Republic of Austria.