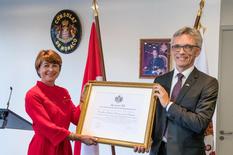 The Ambassador was invited by Mr Bernhard Johannes Stempfle, who was appointed Monaco’s Honorary Consul in Düsseldorf on 6 July 2018.

In her speech, H.E. Ms Berro-Amadeï highlighted the close and longstanding economic, cultural, sporting and tourism ties between North Rhine-Westphalia, the city of Düsseldorf and the Principality of Monaco. “The Honorary Consulate is particularly well-placed to support the development of relations between this important part of Germany and the Principality of Monaco, and to promote and strengthen mutual understanding and cooperation,” she emphasised.

The official opening of the Consulate was attended by Düsseldorf’s accredited consular corps and many local and regional personalities.