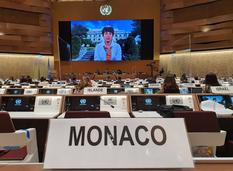 On 1 March 2022, Isabelle Berro-Amadeï, Minister of Foreign Affairs and Cooperation, gave a speech during the high-level segment of the 49th session of the UN Human Rights Council, which is being held from 28 February to 1 April.

The Minister first noted that the COVID-19 pandemic was having a direct impact on human rights and the full enjoyment of basic freedoms, particularly for the most vulnerable groups in society.

She also shared the Principality’s concerns regarding the deterioration in women’s rights observed in recent months in several parts of the world, notably Afghanistan, and called on the Human Rights Council to continue to focus on this priority issue.

The Minister further highlighted preventing violence against children as another priority for the Principality, and took the opportunity to inform the Human Rights Council of the recent passing of a law on combatting bullying and violence in schools.

Finally, Isabelle Berro-Amadeï expressed the Principality’s satisfaction following the Council’s adoption in 2021 of a resolution that, for the first time at the international level, seeks to achieve universal recognition of the right to a safe, clean, healthy and sustainable environment. As she noted, Monaco has offered political support to this initiative, which is the result of financial support that has been granted for a number of years to the UN Special Rapporteur on Human Rights and the Environment.

In the coming days, a session of the Human Rights Council will be devoted to the situation in Ukraine.

The Human Rights Council, a subsidiary body of the United Nations General Assembly, is the primary UN organisation with competence in the field of promoting and protecting human rights. It is headquartered in Geneva and is made up of 47 nations elected by the General Assembly for a three-year period.