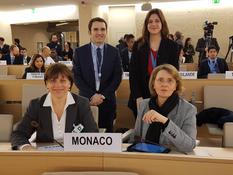 Ms Isabelle Rosabrunetto, Director General of the Ministry of Foreign Affairs and Cooperation, and H.E. Ms Carole Lanteri, Ambassador and Permanent Representative of the Principality to the Office of the United Nations in Geneva; behind them are Mr Gilles Realini and Ms Francesco Casalone Copyright: DR

A Monegasque delegation including Ms Isabelle Rosabrunetto, Director General of the Ministry of Foreign Affairs and Cooperation, and H.E. Ms Carole Lanteri, Ambassador and Permanent Representative of the Principality to the Office of the United Nations in Geneva, took part in the opening of the 40th Session of the Human Rights Council on Monday 25 February 2019. The Session is being held at the Palais des Nations until 22 March.

The Session began with a high-level segment, during which H.E. Ms Maria Fernanda Espinosa Garcés, President of the General Assembly of the United Nations, H.E. Mr António Guterres, UN Secretary-General, Ms Michelle Bachelle, UN High Commissioner for Human Rights, and H.E. Mr Ignazio Cassis, Head of the Swiss Federal Department of Foreign Affairs, all took the podium.The speakers addressed the major challenges facing the world today which have a direct impact on human rights, including migration, climate change and air pollution. The latter, as the UN Secretary-General highlighted, is responsible for nearly 7 million deaths every year. The Secretary-General also expressed his concern over the sharp increase in inequality, leading to instability, discontent and protests. Finally, some particularly serious violations of basic human rights around the world, including threats to freedom of speech as well as discrimination and violence against women, were condemned.

Over the next four weeks, the Human Rights Council will consider issues such as the death penalty, the right to the environment, the rights of the child, and the rights of people with disabilities. It will also address the human rights situation in specific countries such as Syria, Myanmar and Venezuela.

On 15 March, the Council will discuss Monaco’s 3rd Universal Periodic Review, which was carried out on 12 November 2018, with a view to its final approval.