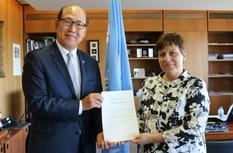 On 14 May 2018, Ms. Isabelle Rosabrunetto, Permanent Representative of Monaco to the International Maritime Organization (IMO), submitted the Instruments of Accession to the 1997 Protocol amending the International Convention for the Prevention of Pollution from Ships, known as the MARPOL 73/78 Convention, to the Secretary-General of that Organization.

This IMO text results from awareness of the threat posed by pollution of the atmosphere by ships.  It is part of the development of the MARPOL Convention, to which the Principality is already a party.

The 1997 Protocol is an important tool for strengthening the international air pollution control system.  It was adopted in London on 26 September 1997 and entered into force on 19 May 2005.  This Protocol adds an Annex (Annex VI) to the MARPOL 73/78 Convention, which introduces new regulations, in particular concerning the prevention of air pollution from ships.  More specifically, these regulations set limits on emissions of sulphur oxides and nitrogen oxides from ships' exhausts and prohibit the deliberate emissions of ozone-depleting substances.

Adherence to this text demonstrates the importance that H.S.H. the Sovereign Prince places on protecting the environment.