Annual meeting of the consular corps 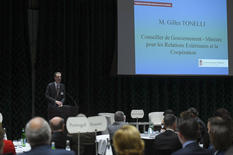 On Tuesday 20 November 2018, Minister of Foreign Affairs and Cooperation Gilles Tonelli opened the annual consular meeting at the Hotel Hermitage. During his introductory speech, Mr Tonelli welcomed the dynamism of the consular network, and its commitment to serving the Principality.

Alongside H.E. Ms Sophie Thévenoux, Monaco’s Ambassador to Belgium, he then presented an update on progress in the negotiations with the European Union.

The meeting also provided an opportunity for Marie-Pierre Gramaglia, Minister of Public Works, the Environment and Urban Development, to give a presentation on implementation of the energy transition in Monaco, and Frédéric Genta, Country Chief Digital Officer, discussed the digital transition.

The Chairman of the Monaco Economic Board (MEB), the Secretary-General of SBM, the Director of Monaco Tech and Monaco’s Ambassador to Poland gave an overview of MEB joint initiatives in 2018.

Finally, there was an update on the economy and international tax agreements from the Director General of the Ministry of Finance and Economy.

Members of the Monegasque diplomatic corps and Monaco’s honorary consuls working on all continents took part in the meeting, which marked the end of the Monaco National Day celebrations.

The Principality currently has 138 active consulates in 81 countries.