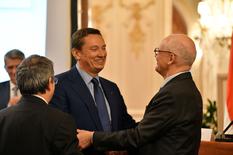 Marc Lecourt, the new President of the ACHM's Board of Directors, being congratulated by the Minister of State ©Government Communication Department/Manuel Vitali

Yesterday, the Association of Honorary Consuls of Monaco (ACHM) held its General Assembly, in the presence of H.E. Mr Serge Telle, Minister of State, Georges Lisimachio, Head of Cabinet of H.S.H. the Sovereign Prince, Gilles Tonelli, Minister of Foreign Affairs and Cooperation, the Ambassadors of France, Italy and the Order of Malta, and many dignitaries.

This General Assembly was the last chaired by Moustapha El-Solh, Honorary Consul of Lebanon, who wished to step down as President of the Board of Directors of the ACHM, after two five-year terms.

The election of the new Board of Directors was the second highlight of this General Assembly.  This new Council then met immediately and elected Marc Lecourt, Honorary Consul General of Slovenia in Monaco, as President.

As a reminder, the ACHM was created in 2003, at the instigation of Prince Rainier III, with the aim of uniting the foreign consular corps accredited to Monaco and facilitating the integration of new honorary consuls on their appointment in the Principality.