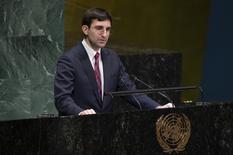 On Tuesday 11 December, the UN adopted its annual resolution on the oceans and the law of the seas, which includes a reference to the 2017 meeting on the socio-economic impact of ocean acidification organised by the Monaco Scientific Centre and the International Atomic Energy Agency in the Principality.

In his speech, Florian Botto, Second Secretary at Monaco’s Permanent Representation to the United Nations in New York, recalled H.S.H. the Sovereign Prince’s commitment to marine protected areas and marine science, particularly in the context of Monaco Explorations.

He also noted the 3rd Meeting of the Signatories to the Memorandum of Understanding on the Conservation of Migratory Sharks, which is taking place in the Principality this week.

Finally, he highlighted the fact that the issues of climate change and ocean health are linked, and that in September 2019 the Intergovernmental Panel on Climate Change (IPCC) will present, in Monaco, a report on the oceans and the cryosphere in a changing climate.