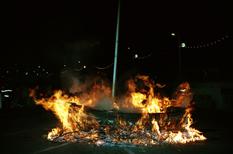 These celebrations are among the Principality of Monaco’s oldest traditions, and have permeated the national culture in areas as diverse as religion, folklore, popular beliefs, history, literature, the arts, painting, music, coins and stamps.

The tradition derives from the so-called “Legend of St. Devota” passed down through a medieval document. It holds a special place in the heart of Monegasques.

According to the legend, Devota, a young Christian woman from Corsica, was martyred by the prefect Barbarus under Emperors Diocletian and Maximian. Her body, believed to have been removed the following night by believers, was placed in a boat and taken to Monaco to be buried in a chapel in the Vallon des Gaumates on 27 January of the year 303 or 304.

Under Honoré II in the seventeenth century, St. Devota became the patron saint of Monaco.

According to a tradition established in the 1870s, every year a boat is burned on a pyre in the presence of the Sovereign, the Royal Family and numerous high-profile figures from Monaco. Following the burning of the boat, there is a musical fireworks display on Port Hercule.

On 27 January, the day of the festival, a solemn mass is celebrated in the Cathedral by the Archbishop of Monaco. This religious ceremony is attended by the Royal Family, the Prince’s Government, the elected assemblies and constitutional bodies, and many of the faithful. After the ceremony, a procession involving Penitents of the Brotherhood of Mercy heads towards the Prince’s Palace with the shrine containing the relics, escorted by the Palace Guards.

10.30 am Church of St. Devota: Mass of the Traditions, in Monegasque.

Blessing of the Sea

Release of the dove

Presentation of relics and blessing of the city

(in the presence of the Palace Guards)

7 pm Church of St. Devota: Benediction of the Blessed Sacrament,

presided over by His Grace Bernard Barsi, Archbishop of Monaco,
in the presence of H.S.H. Prince Albert II and the Royal Family

7.30 pm Forecourt of the Church of St. Devota:
Burning of the Symbolic Boat by the Royal Family

9.50 am Cathedral: Welcoming of the Relics by Members of the

Clergy and the Venerable Brotherhood of Mercy

10 am Cathedral: Pontifical Mass presided over by

Responsorial psalm 33: Qui regarde vers Dieu resplendira (Those Who Look to Him Are Radiant) – Jean Revert

Prayer for H.S.H. the Sovereign Prince

11.15 am Monaco-Ville: Solemn Procession of the Relics

led by His Grace Bernard Barsi and with the participation of:

members of the Clergy

the Cathedral Choir and Penitents of the Venerable Brotherhood of Mercy

a delegation from Lucciana Municipal Council

and the Musique Municipal orchestra

Route: Depart from the Cathedral Forecourt

From the Ramparts: Blessing of the City,

Return to the Cathedral via Rue Colonel Bellando de Castro

Cathedral forecourt: BLESSING OF THE SEA

Mgr Barsi will bid his farewell and will give thanks for the blessings received from God during his episcopacy. Following the mass and procession, a reception will be held in the Conference Room at the Oceanographic Museum of Monaco.

A Masterclass at the Great Organ of the Cathedral