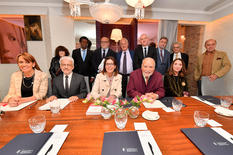 The Literary Council of the Prince Pierre of Monaco Foundation met in Paris at La Dame de Pic restaurant to draw up a shortlist of authors under consideration for the Literary Prize, which recognises a renowned French-speaking writer for the whole of his or her work.

Also selected for the Discovery Grant, a prize awarded to a French-speaking author for a first work of fiction, were:

Christine Barthe for Que va-t-on faire de Knut Hamsun (What are We Going to Do with Knut Hamsun*), Editions Robert Laffont

Joseph Ponthus for A la ligne (To the Line), Editions Table Ronde

All these books will be the subject of the forthcoming Reading Marathon, to be launched on Tuesday 18 June 2019 at 3 p.m. at the Monaco Multimedia Library.

The winners of the Literary Prize and Discovery Grant will be announced at the Foundation's Prize Announcement Ceremony on Tuesday 15 October 2019 at the Salle Garnier.

*Translations of book titles provided for information purposes only.