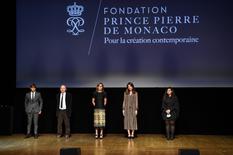 The winners of the 2020 awards were announced at the Prince Pierre of Monaco Foundation prize ceremony this evening. The ceremony was held at Monaco’s Opera Garnier and presented by Arnaud Merlin, writer, journalist and producer for France Musique.

Established in 1951, the Literary Prize honours a well-known writer in the French language for their entire body of work. The shortlist of authors selected for the Prince Pierre Foundation’s Literary Prize 2020 is as follows:

The Literary Prize was awarded to Christian Bobin.

Established in 2001 to mark the fiftieth anniversary of the Literary Prize, the Discovery Grant is awarded each year to recognise an author in the French language whose first work of fiction has just been published. The authors shortlisted for the Discovery Grant 2020 are as follows:

The winner of the Discovery Grant is Salomé Berlemont-Gilles.

The winner of the High School Pupils’ Favourite Choice Award is Mathieu Palain.

The Principality Prize, which was established in2017 and is jointly presented with Philosophical Encounters of Monaco, is awarded to an author for their entire body of philosophical work.The prize honours a life of philosophical writing, an outstanding body of work which has opened up new paths in the field of philosophy and introduced alternative approaches in science, politics, theology, history, anthropology, ethics or psychoanalysis.

The winner of the Principality Prize is Hélène Cixous.

It should be noted that the award of the Young Music Fans’ Favourite Choice and Musical Contest prizes, which are traditionally presented in the two years preceding the Musical Composition Prize, has been postponed to 2021.

The Prince Pierre Foundation also paid tribute to two authors and members of the Literary Council who passed away this year: Jacques de Decker, Honorary Permanent Secretary of the Royal Academy of French Language and Literature of Belgium, and Jean-Loup Dabadie, a member of the Académie Française.

Virgin with the Rosary returns to Monaco Cathedral