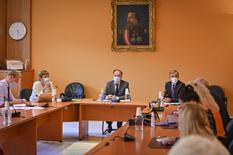 On Monday 21 September, the Monegasque Institute of Statistics and Economic Studies (IMSEE), presented the Principality's Economy Bulletin* to the Press.
Accompanied by Government Ministers Didier Gamerdinger and Jean Castellini, Sophie Vincent, Director of IMSEE, highlighted the exceptional nature of the period of April-May-June 2020, which straddled lockdown and the lifting of lockdown, explaining some unprecedented figures.

Over the first half of the year as a whole, compared to the same period in 2019, the Principality's turnover fell by 13%, with a loss of more than EUR 900 million. "Only two sectors are holding up - Construction and Scientific and Technical Activities, and Administrative and Support Services. On the other hand, the hotel and restaurant sector lost 60% of its turnover and there was also a very sharp decline in both Wholesale and Retail Trade."

At the end of June 2020, there were 8,000 fewer jobs compared to June 2019 (a decrease of 13.8%) in the private sector, even though monthly rebounds were recorded as soon as the lockdown was lifted (up 13% between May and June, and up 74% in the hotel and restaurant sector only) with different situations depending on the sector. These statistical figures should, of course, be seen in relation to the fact that the quarter under review was marked by total lockdown, followed by a partial resumption of activity.

Finally, thanks to the business support measures, the number of establishments that ceased trading was lower than in 2019 (208 compared with 268) and the balance between new businesses and closures remained positive.
With regard to employment, Didier Gamerdinger, Minister of Health and Social Affairs, welcomed the beneficial effects of the aid measures implemented by the Government, beginning with the CTTR, "which have made it possible to build a protective shield for companies and their employees." He announced, however, that five new social plans were under way in the Principality, in addition to the existing twenty or so, and concerned some thirty employees in the yachting sector, which had been hit hard by the crisis. He confirmed that the State and social partners were currently working on the concept of flexible working to further contain future effects of the crisis.

Finally, Jean Castellini, Minister of Finance and Economy, spoke of "a Monegasque economy that has been affected over the long term, the development of which will depend in the coming weeks on developments in the health crisis, the employment situation and macroeconomic events such as Brexit and the American elections." He pointed out that the Government had just tabled the final draft of the Amending Budget, with a deficit of EUR 165 million, with the National Council. "This is better than expected during the two previous special amendments, because receipts for VAT on real estate were better than predicted and the fall in VAT on goods and services, particularly in the hotel and restaurant sector, was smaller than we had forecast."

* Available on line on the web site www.imsee.mc

IMSEE Publishes the Economic Results for the 2nd Quarter of 2021